This is a fan that takes a carbon filter cartridge. It’s used to redirect the fumes encountered during electronics soldering.

Research and Prior Work

This is one of many similar implementations. (You probably don’t want to use this one, for reasons stated here.)

For professional/serious use: a commercial unit off of the shelf (like this Hakko unit) is much more appropriate.

It includes a HEPA filter, which is effective at capturing more of the particulate generated during soldering (see: “Measurement of the Performance of Air Cleaners Against the Particulate Element of Rosin-based Solder Flux Fume” – PDF here).

Also: Cheaper, nearly finished units are also available too. These require simple modifications (tape or additional 3d printing) to get you there, but like this unit, are probably best used with external ventilation.

The reason this exists is that I had an extra 140mm fan in a corner.

Where to from here?

If you’re here for the parts and instructions, there is a list in the “Parts” section. Instructions begin right after that.

If you’re intersted in the design process, it’s what follows after this!

I started off in April 2017 by buying a 140mm Noctua fan. It sat in a corner for a while, destined for a quiet dust filter build.

Fast forward to seeing a carbon filter - I threw one in my cart as I was buying robot parts and decided to design a carbon/fan extractor/absorber instead.

With a few changes, I could also use this as a dust filter / air freshener too.

These are from OnShape, a cloud based CAD tool. 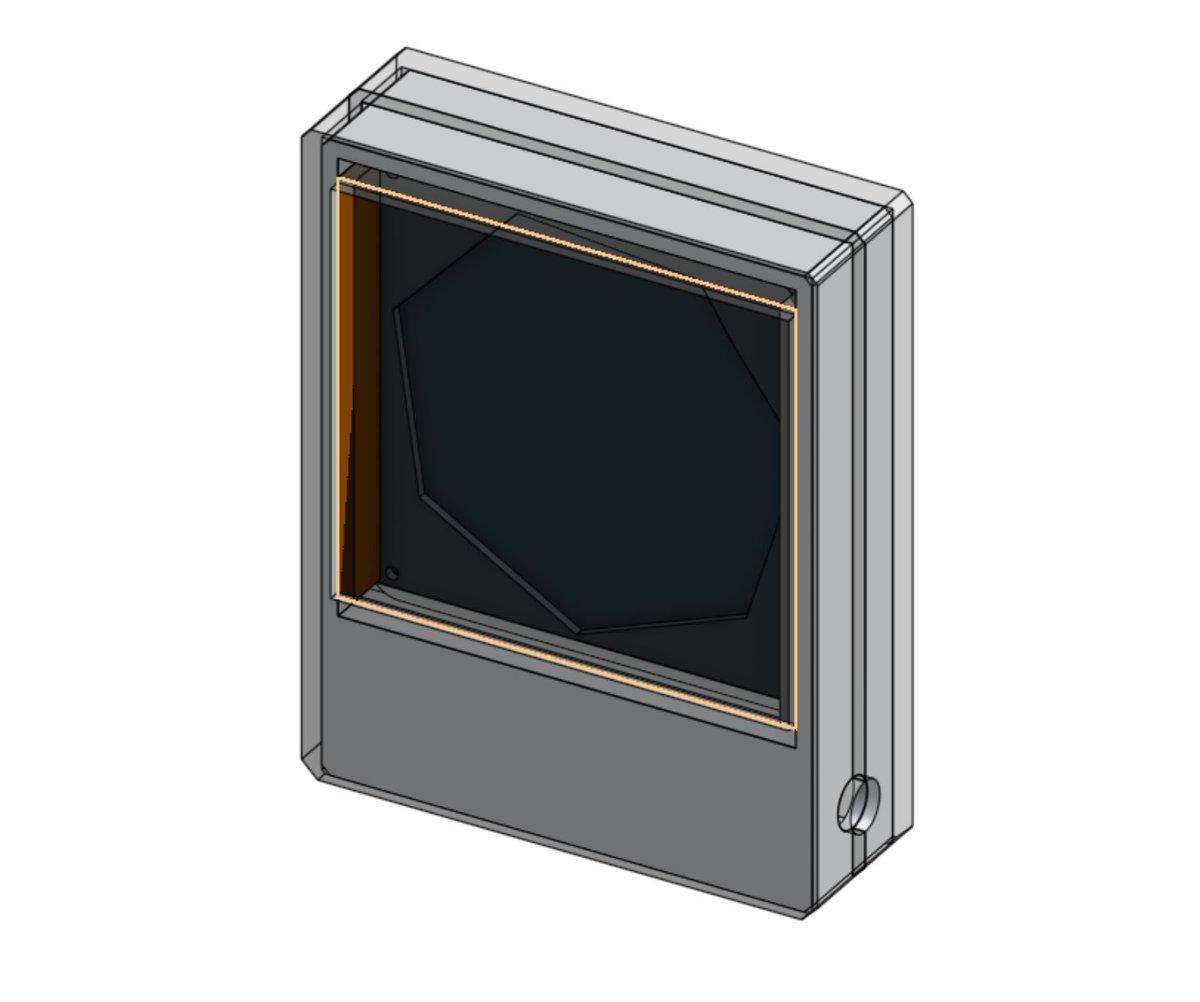 The entire filter assembly, front to back.

Inputting the pieces required extra work up front, but having the flexibility to adjust the spacing between inner-connected components saved a lot of time.

And basic placeholders (the charcoal filter is a squarish translucent black block) helped with rendering speed too.

Each piece here was the size of a large technical book (comparable to a copy of “The Art of Electronics”).

5-8 hours for each piece (there are three), on a Prusa i3 MK2 with a 0.2mm height setting and normal speeds. 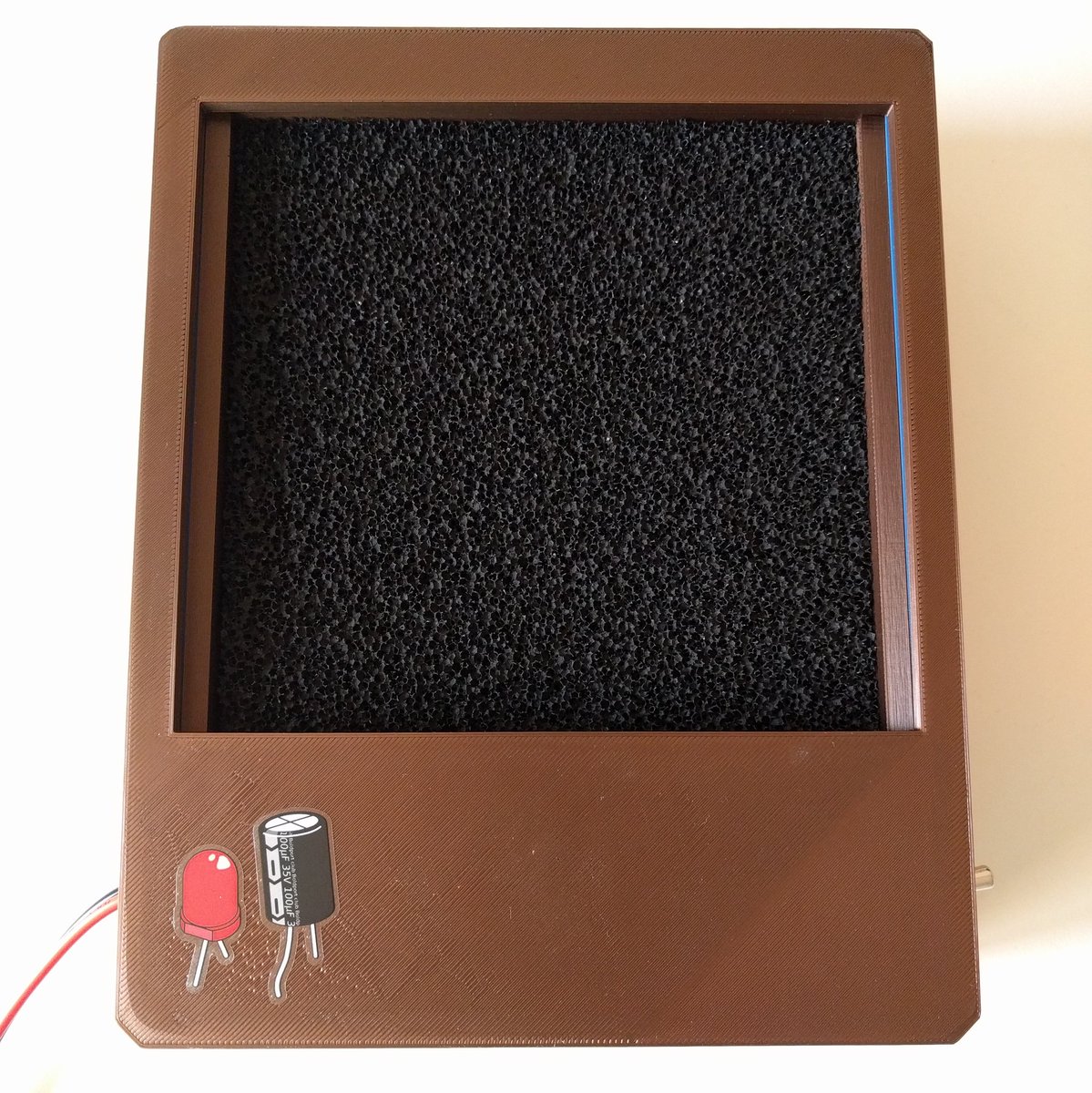 The carbon filter, nestled in the case nicely.

(The stickers are from Boldport’s sticker CAD sheet, bringing more attention to an uneven spot in the bed) 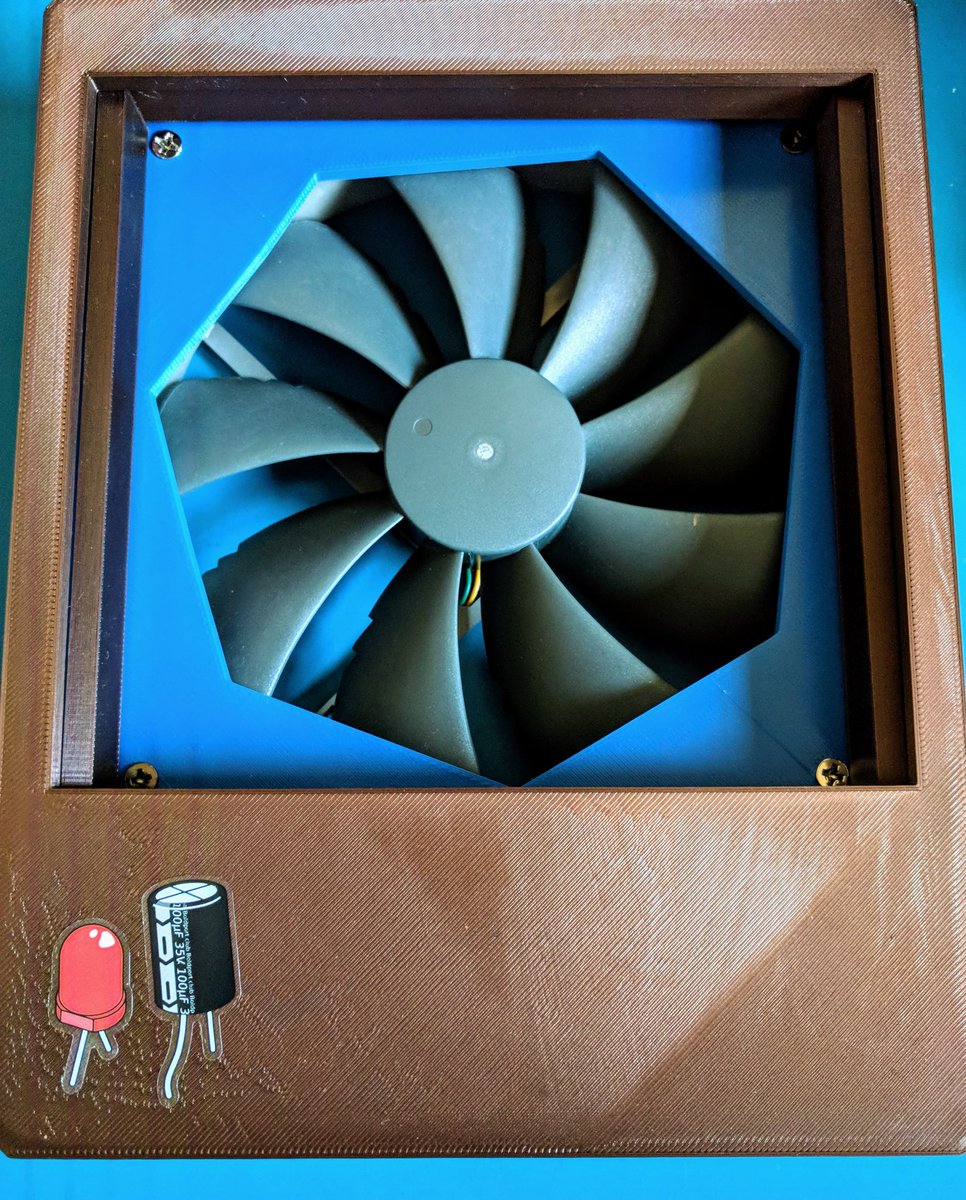 The fan and fan spacer (with the filter removed). This kept the fan blades from chipping away at the carbon filter and served to keep both a set distance apart. 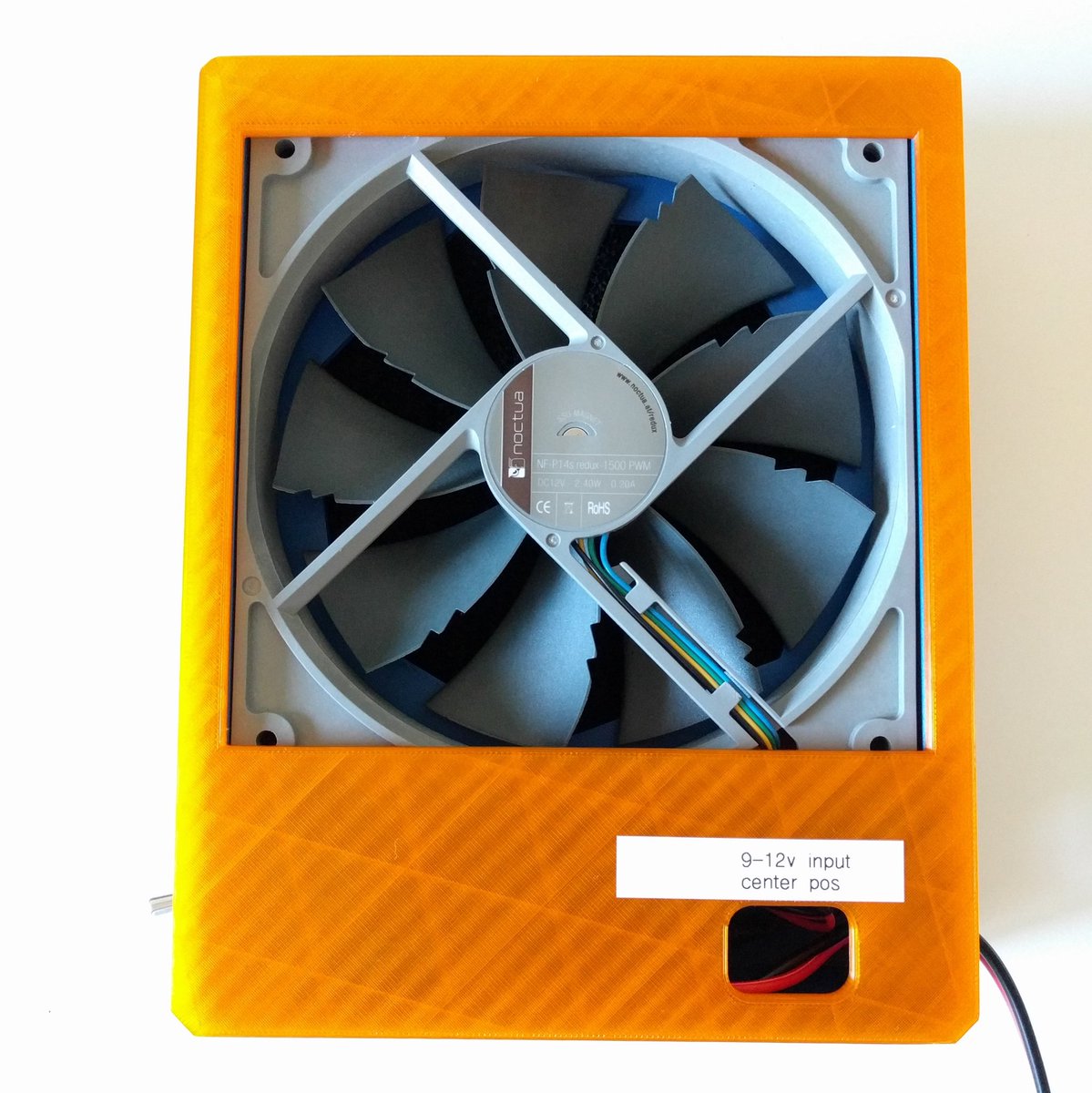 The cutout on the back cover is unused in the final version, but here, it was designated for a rocker switch/speed control/add-on.

There were several errors in this version:

Improving on the first version 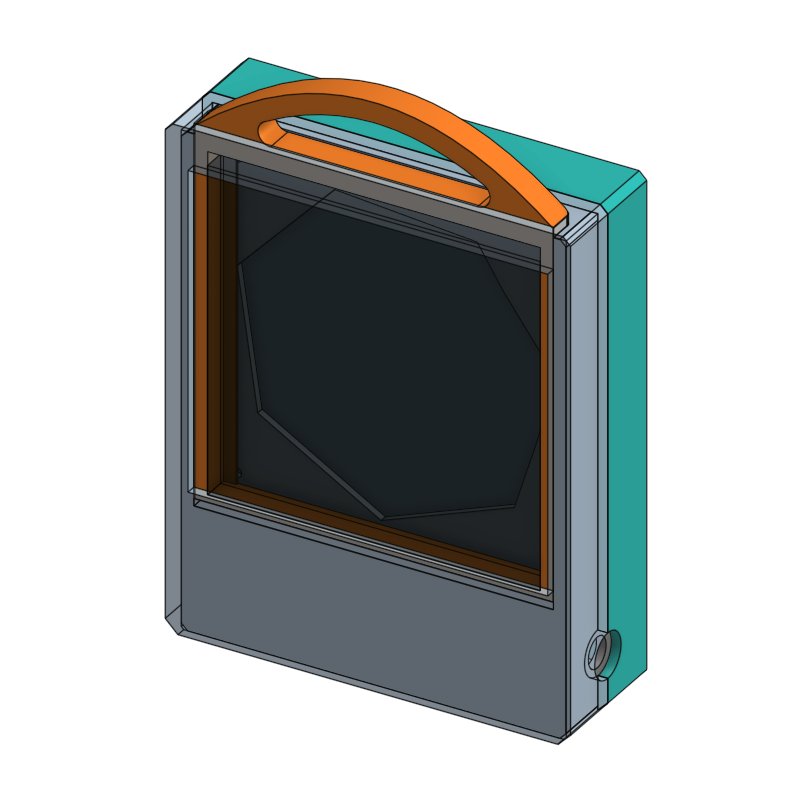 User-friendliness of the filter became a priority in the updated version.

Before I could print all of the second version, I figured that the cartridge handle could double as a handle too, but it needed a bit more security.

With the screw in place, the cartridge’s handle acts as a carrying handle for the entire unit. 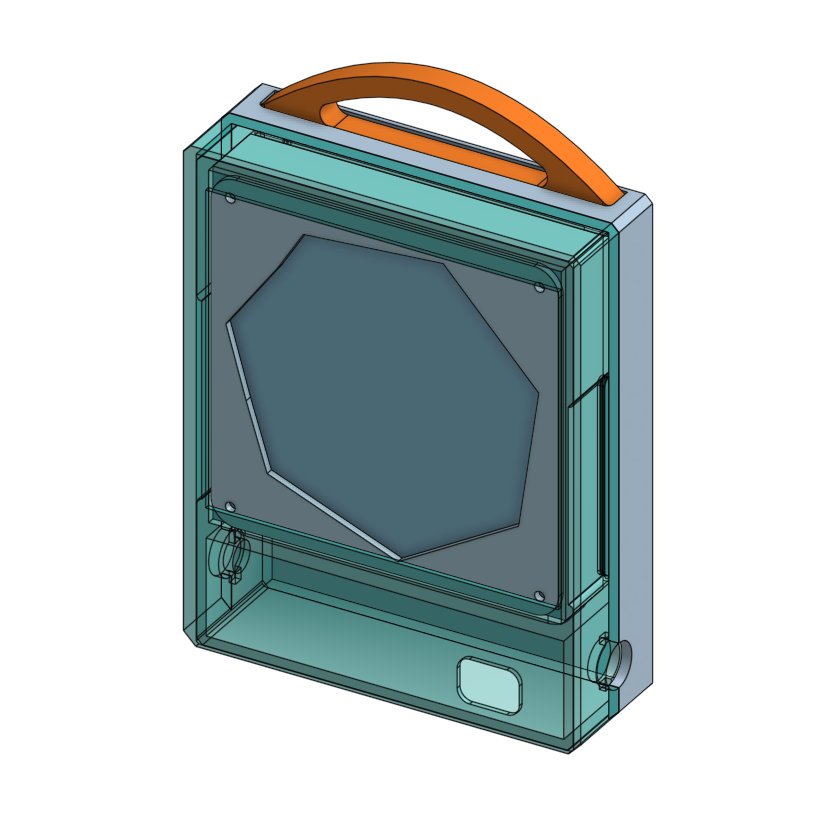 It still looks pretty boring in CAD! I think this is a good thing. 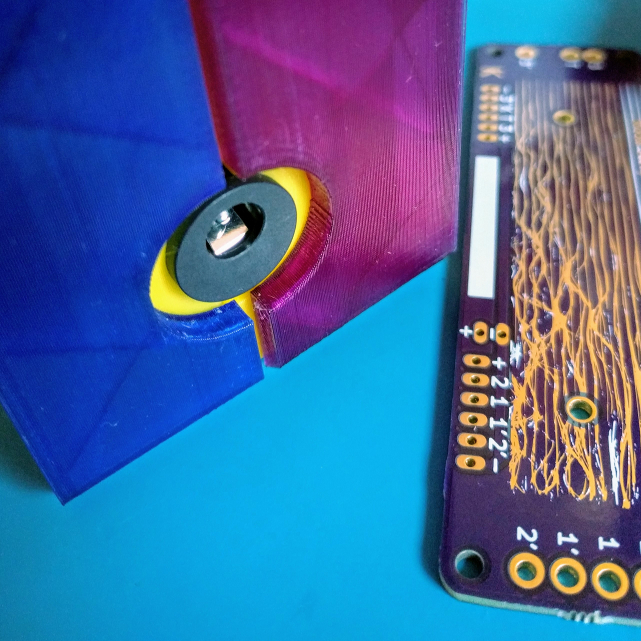 Here’s the outside where the panel mount DC jack is. Some deburring was needed here before the jack would seat properly.

Sandpaper would work just as well if you encounter this issue too. 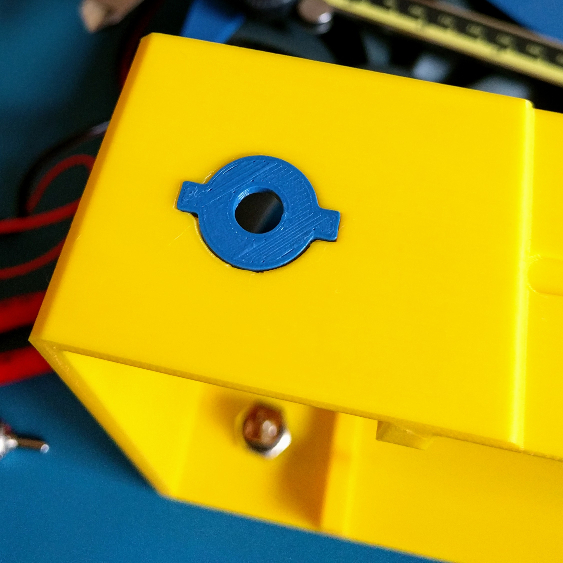 This is the toggle switch’s plate. It allows for different sizings of switches to be inserted. The press-fit is fairly tight.

The cartridge slides out smoothly too.

Here’s the part list! If you’re doing this on your own, please substitute or add as you wish. It’ll hopefully end up being your number one fan. 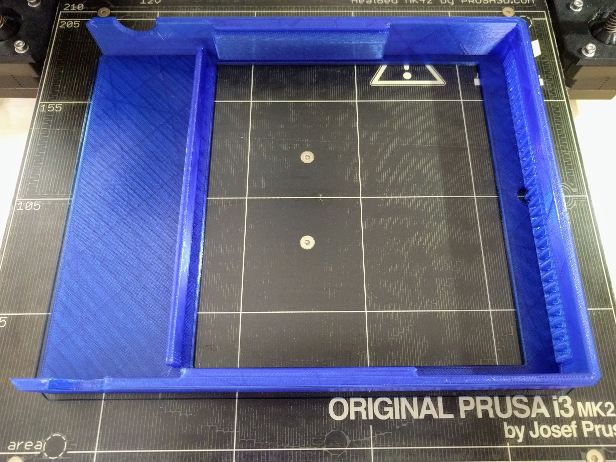 Adafruit sells a 3-conductor version with a window. I’ve been using a box of the gray two-conductor connectors off of Amazon, so I’ve not needed to use the newer versions.

Something like this – I wouldn’t recommend going out to buy one though! Soldering silicone wire to one end of a 2.54mm header will work in a pinch (use hot glue to keep it attached to the fan header).

The prints are in this repository: https://github.com/Collector3/fume-away (now on YouMagine and Thingiverse as well, if you came from there, hello!).

If you’re using the smaller SPST switch, print the 6mm adapter as well.

The prints take a long time, but assembly is (hopefully) straightforward.

Screw the fan-grill and rear-fan-grill pieces onto the fan, using fan screws (four are included in the Noctua box, use two in a diagonal configuration for each). They should tap into the plastic and into the fan itself (try to drive them straight in).

Tap the hole if you want to use the cartridge as a carrying handle with an M3 tap. Choose any screw size that keeps the cartridge in place and engages the front cover. An M3 x 16mm was used in development. 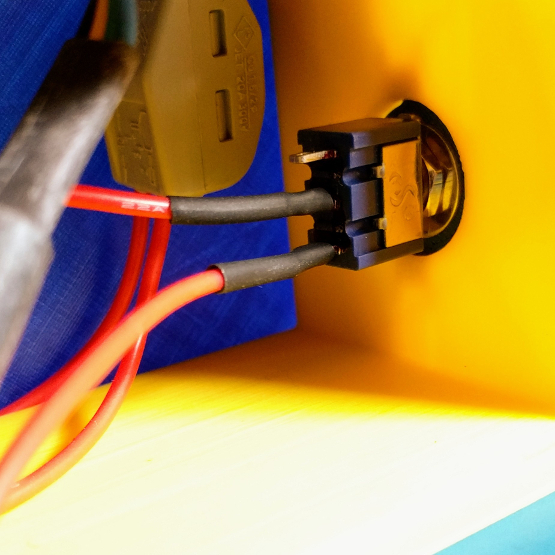 With a multimeter in continuity mode (aka beep mode), check the switch to see which contacts you’ll be wiring to. Power input goes to the center pin and it is distributed to the two ‘poles’ on either side, as the switch is flipped.

Counter-intuitively, the ‘on’ position means the bottom tab is connected to the center pin (just ‘flip’ the switch around physically if soldered backwards: nobody will know).

Strip two wires, red/red, cut & add heatshrink tubing, then carefully solder the wires to the switch. Use a blow dryer or quick flick of a lighter to tighten the heatshrink.

To attach the toggle switch, tap the 6mm press-fit mount into the case, like this:

It should fit snugly; if it doesn’t, a bit of glue/epoxy will help to keep it in place.

To attach the switch, unscrew the top retainer and the ‘external lock washer’ (looks like a spiky dog collar, feels prickly) from the toggle switch.

Insert the toggle lever from inside the case and push it through to the outside. Then screw the retainer and washer onto the top to secure it. 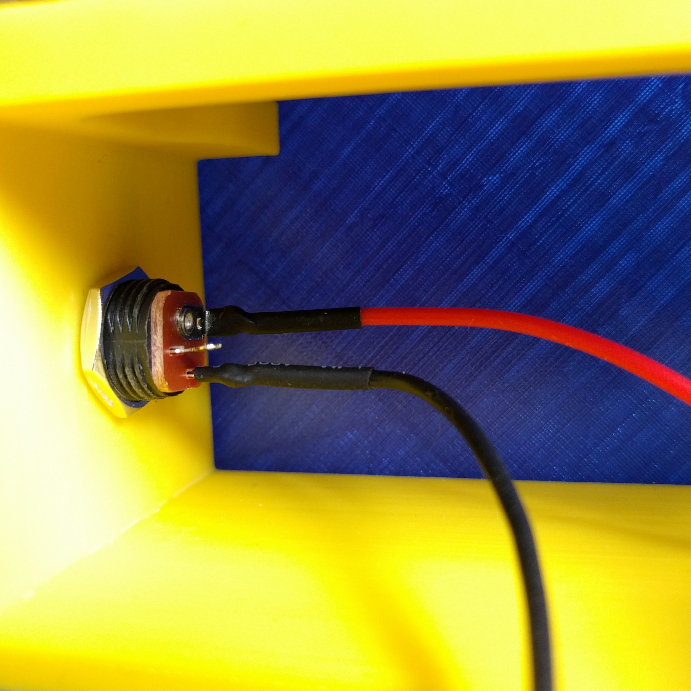 With this jack, the negative poles will switch connectivity depending on whether or not a DC jack is inserted.

To absolutely verify which pins to solder to, use a multimeter and carefully measure the voltage across the pins, with the power supply plugged in. It should read 12V and indicate which pins are positive and negative (if you get a -12V reading, the multimeter’s leads are backwards).

Strip two wires, red/black, cut & add heatshrink tubing, then solder the wires to the panel-mount jack. Again, use a blow dryer or lighter to tighten the heatshrink.

Note: If at first, the panel mount jack does not fit, use a bit of sandpaper or a deburring tool to widen the hole, as different printer-to-printer tolerances can deposit a little more in this area.

Attach the panel mount jack to the case from the outside, pushing in (threading the wires in first). Secure it to the case with the retainer from the inside. 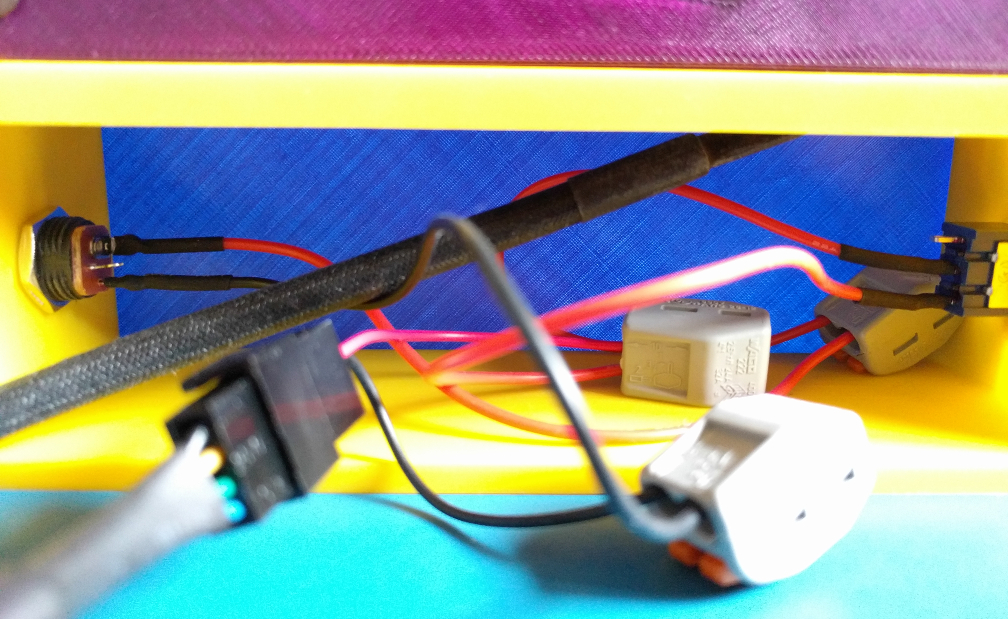 If that picture looks confusing, it is! We’ll break it down together.

We’ll start by following the conventional path of current flow. From the power supply brick, it goes into the positive pin of the DC jack. Then it enters a wago connector and exits to the center pin of the toggle switch.

From the center pin of the toggle switch, it exits to the bottom pin (when in the on position), into another wago connector.

Another wire from the connector then connects to the positive pin of the fan’s yellow wire.

How about a diagram?

Also: If you’re super confident that nothing will be re-used, and that there are no further improvements to be made, feel free to do away with the wago nuts and wire/solder/crimp directly.

If you’ve acquired a four pin to two pin molex fan connector, now would be the time to substitute it in.

Other options include using a 2.54mm Male/Male header as a go-between (soldering wire to one end) and hot gluing everything so it stays in place.

Cutting the fan header off and attaching the yellow (positive) / black (negative) ends to the switch/DC jack would also work in a pinch.

This about completes the build process. If you’ve made it this far, thanks!

It’s rather unlikely that there will continue to be updates to this build (i’ll probably revisit it to add a HEPA filter if my soldering area changes), but if you are interested in improving it for your own uses, please grab the STEP files and make this build your own. 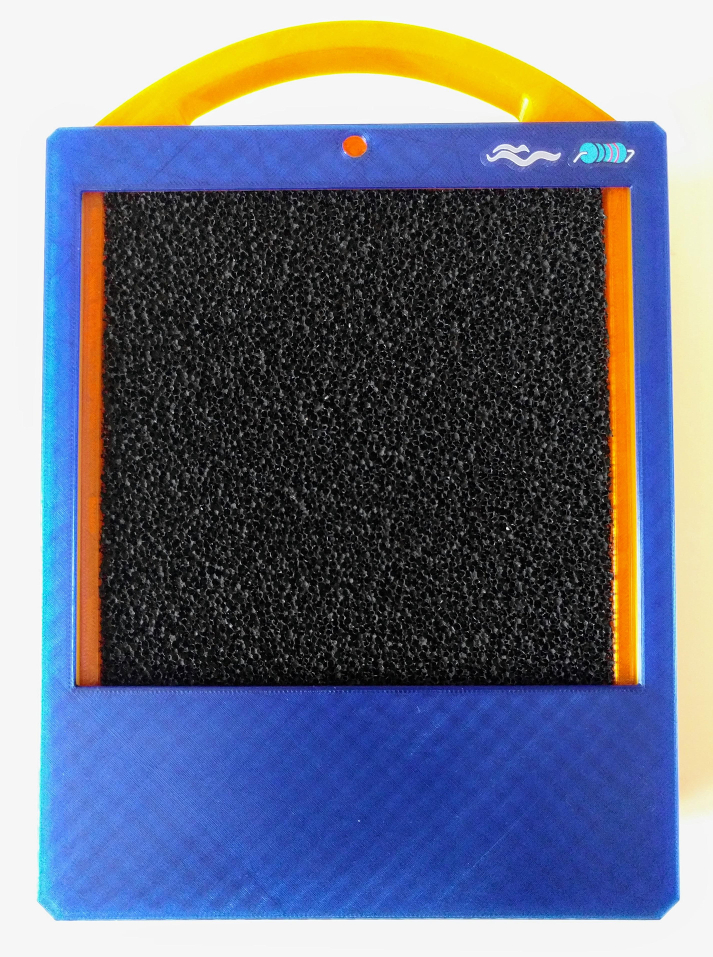